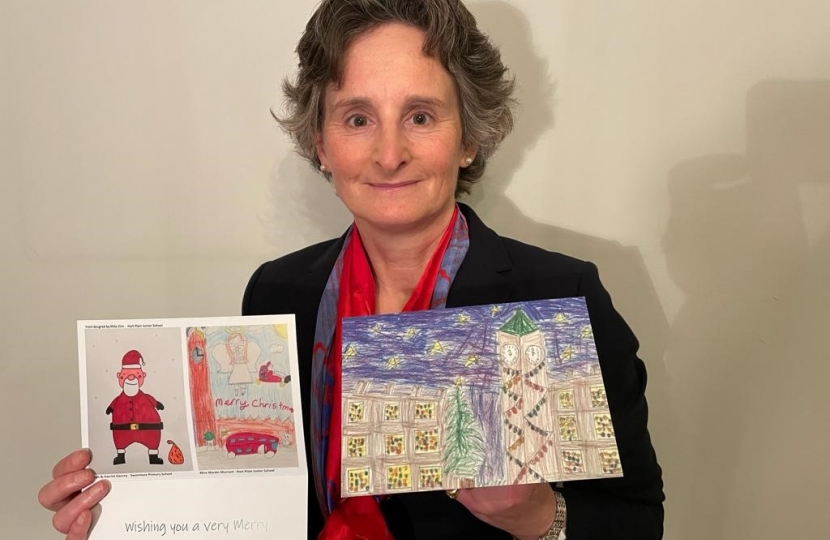 Michael Zilin, 9, from Hart Plain Junior School won with a colourful design of Big Ben and the Houses of Parliament. His card will now go to scores of people across the country, including the Prime Minister.

There were two runners up - Alice Martin-Murrant, 10, also from Hart Plain Junior School and a joint picture from Joseph and Harriet Garvey aged 11 and 8 respectively who attend Swanmore Primary School. Their images are on the inside of the card.

“Many congratulations to Michael, to the runners-up and to all those who entered the competition, I was very impressed with the standard,” said Flick.

“The cards will now be posted off to adorn quite a few mantelpieces, including one at 10 Downing Street.”

Hart Plain Junior Head Teacher Charlotte Faithfull added: "I am really proud of the children's effort and finished artwork.  It is wonderful to have some cheery news to share with our community."

Flick picked her six favourites and that shortlist was then judged down to the final three by local photographer Craig Robertson.

Today I spoke in Caroline Ansell's Westminster Hall Debate on Introducing a Natural History GCSE. I discussed how there are better ways to integrate natural history into a school curriculum, rather than introducing a new GCSE.