Flick is appointed the voluntary Director of the Conservative Policy Forum 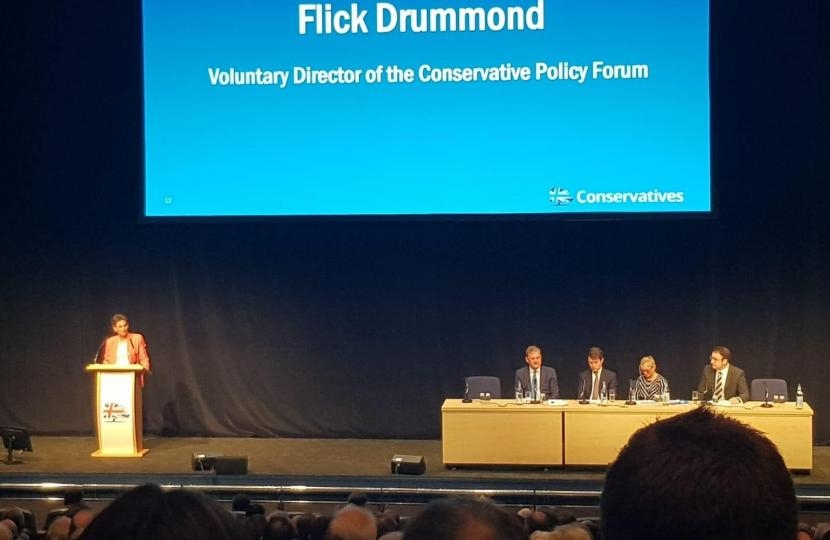 Former MP Flick Drummond has been elected as the next CPF Voluntary Party Director.

Flick was up against a very strong team of applicants, ten of whom were interviewed by the CPF Management Team (consisting of Chairman George Freeman, Vice-Chairman Andrew Sharpe, the outgoing Voluntary Director Hannah David, and Policy Director John Hayward), from which three names went forward for election by members of the National Convention. Flick was revealed as the winner when the Convention met at the start of the Party Conference in Birmingham.

She addressed the Convention:

Thank you for your confidence in me. It is really nice to win a vote again. It has been a tough year for me and the 32 colleagues who also lost their seats, but politics has always been tough for us fighting in marginal seats. And that is the reason why I have taken on this role. We have to win back those marginal seats if we want to remain in government.

The Conservative Policy Forum has never been more crucial or relevant to our party. Sir Eric Pickles recognised this in his General Election Review. For we live and die on our policies. When we get them wrong, we are punished for it.

Now we have the opportunity to use the CPF, the members’ political voice, to get it right for our manifesto.

A Party that has been in power for some time can find it difficult to reinvent itself. We should not be that Party. We should have confidence to change. And we have to win the battle of ideas

We have always been capable of incorporating new ideas. We are all members of this great party for a reason. We want it to succeed. We need to stay in government, more now than ever before.

But we have to seem relevant. Too many people are disengaged; don’t vote; or don’t know which party to vote for. Turnout has decreased. Trust in government and all politicians has fallen. Only 43% of 18-24 year olds voted in the 2017 election. Only 57% of people with no qualifications even bothered to register to vote, according to the Electoral Commission. And we have all met people on the doorstep who state there is ‘no point in voting’. We need to reach out to those people.

So we need to become more accessible. People are hearing about the supposedly wonderful things that a Labour Government would provide (free this and free that), none more so than over the last week. Young people, in particular, are being taken in. They have not lived through a socialist Labour government.

During the last election, I campaigned in some solid Labour areas. Any Labour supporters over the age of 60 are horrified at what is happening with their party. I met several of them who voted Conservative in 2017 – referring to both Corbyn and McDonnell ‘as those communist [***]. Don’t let them get in.’

That means we have to work harder than ever to garner information from the voters, and that is where CPF come in.  You are the eyes and ears of the Party – I suspect many of you are trustees, school governors and volunteers in your communities. You know what is going on on the ground.  You provide that channel of information both up to your MP or candidate and also down in explaining government policy to friends and colleagues – and sometimes that has not been easy.

So I would like to take it further. We need to recapture the imagination of the public. Let us use CPF to be a more inclusive listening party. To do this, we need to widen our CPF discussion groups to the community. We need to be brave in opening our doors to those who want to contribute and to those who might challenge us.  We need to listen to other points of view and see whether we can adapt our thinking.

So over the next few months, I will be working with CPF chairs in your associations, alongside our CPF champions, to work on this. Those of you who haven’t got a CPF established, we want you to identify CPF leaders in your constituencies.

We will be inviting people working in various sectors of the community to address the meetings and CPF leaders will be managing the discussion. Minutes will be taken and fed back to Ministers, whom we will be asking to respond to a much wider sector of the community than the membership.

I believe this to be crucial to starting off the dialogue with the public. We are an inclusive party, we open our doors to everyone and we will listen. And we need to be robust enough in our defence to combat some of the economically damaging ideas coming out from the Labour party.

So how do we reach out to the next generation. Young people often ask me how to get involved, how they would like the tools to be able to debate clearly the issues with their contemporaries and teachers. I saw a very successful education programme work in the United States through the League of Women voters. I will be looking to design a similar programme here that we can take into schools to explain why it is so important to vote and how to look out for fake news.

Social media is their main source of information, so we will also be looking at our social media output to make it more relevant.

And why are we not attracting the votes of women? We have had two brilliant female Prime Ministers who have taken over in challenging times but it seems it is not enough. That is another challenge that our CPF must look to, alongside our Conservative Women’s Organisation. If we want to become more relevant to 51% of the population, we must listen to what women are saying, because they are not engaging with us at the moment.

We cannot be complacent anywhere, including our safe seats. I come from a marginal seat where we need to fight for every vote but I was a city councillor in Winchester in 1997 when we lost our very safe seat to the Lib Dems. If you haven’t got a functioning CPF, contact us. But most of all, be brave, open up CPF discussions to the community. Don’t be afraid to discuss the difficult issues and make sure that everyone feels included and listened to.

If we do this, we will win back those marginal seats and have a bigger majority in 2022 to steer us through the years ahead.

Last week ended with some fascinating constituency meetings and events. I met with Inspector Andy Tester of the Hampshire Constabulary to discuss the issues some Meon Valley residents are having with speeding and noisy motorbikes.