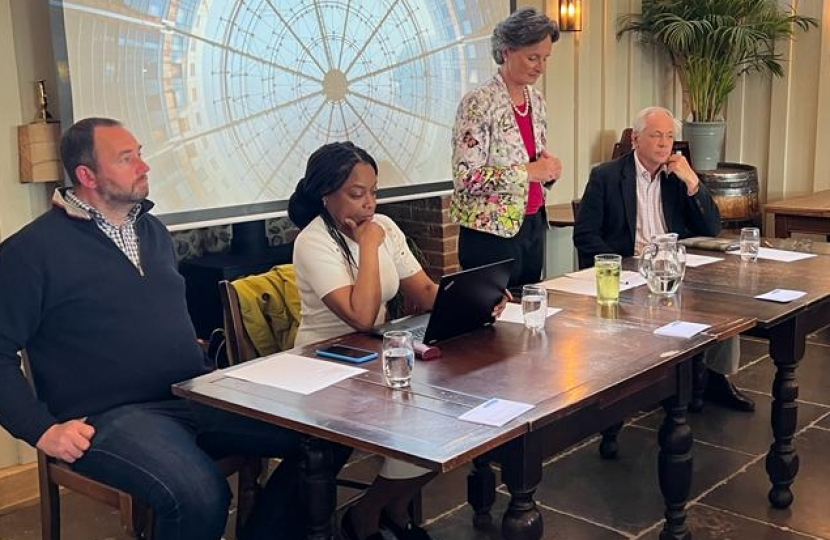 Flick hosted the Community Forum at the Flower Pots pub in Cheriton on Friday.

The packed gathering addressed connectivity issues in the Cheriton, Bramdean, Kilmeston, Woodside and Dean areas of her constituency.

It came after concerns from the villages’ residents that they are not receiving better broadband and 4and 5G mobile signals.

“It is vital for businesses and families that they have access to better connections, whether fibre or new wireless solutions or 5G and I wanted to hold this forum so my constituents could understand and ask questions of the panel and myself about progress and the problems in achieving good speeds,” said Flick.

“And good progress has been made in recent years, when we have increased coverage to over 97% across Meon Valley with good broadband.

“However, some pockets remain where speeds are very poor, even though in some cases fibre already runs right past them.

“I understand the frustrations of residents, and I’ve met ministers to discuss ways of solving these problems.”

Flick said she was pleased that the Government has funded Project Gigabit to fill in areas where it’s not feasible for commercial providers to operate using a voucher scheme. BDUK is the Government agency working with broadband providers to coordinate roll-out of high-speed broadband

“I lobbied Ministers for Meon Valley to be included in the latest round of tenders which will be issued by BDUK in a few months’ time,” she explained.

She said Hampshire County Council has played a key role in this by providing top-up funding for community projects. But she added companies such as CallFlow and Openreach have a key part to play.

She also thanked Rupert Boissier and his team at the Flower Pots for enabling the meeting.

“We covered a lot of ground and I will repeat the forum so residents can have updates from the bodies responsible for broadband and 5G provision,” she concluded.

Flick makes a Statement on the Prime Minister

Please see my statement below regarding my position on the current circumstances:

"I am pleased Boris Johnson is to resign. Yesterday, I told the Chief Whip I had no confidence in the Prime Minister and I asked him to convey my view that he should resign.