Flick in the Media: Hampshire Chronicle 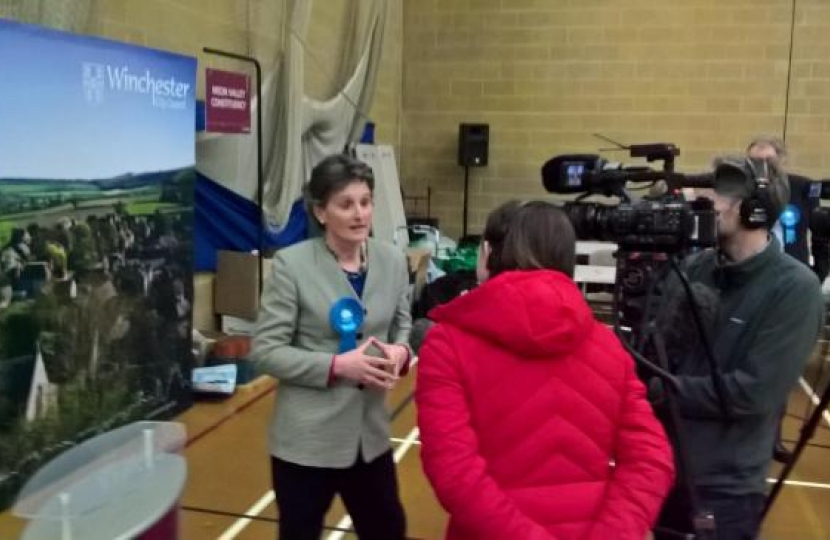 Flick Drummond has returned to the House of Commons with a massive majority in the Meon Valley.

The former Portsmouth South MP and Winchester city councillor romped to victory with 35,271 votes beating her rivals, Cheriton-raised Lewis North, standing for the Liberal Democrats, who got 11,716 votes, Matthew Bunday for Labour who polled 5,644 and Malcolm Wallace for the Greens who attracted 2,198.

Ms Drummond nearly increased the majority of 25,632 secured by the former MP Sir George Hollingbery. Sir George only announced he was standing down five weeks ago giving Ms Drummond little time to prepare her campaign. Her winning margin was 23,555, very good for a new candidate.

She gathered more votes than the three other candidates combined. Her share was 64 per cent just shy of the 65.7per cent secured by Sir George in 2017.

In her victory speech at the River Park Leisure Centre in Winchester at 4.55am, she said: "It has been a long day. There is no doubt in my mind having campaigned all day for the last four weeks that people want certainty. Whether you voted remain or leave we have to put faith back into politics and deliver on Brexit."

Mr North had a good election, more than doubling the party's vote and leapfrogging Labour into second place. He had told the Chronicle that he hoped to reach 30 per cent of the vote but had to settle for 21 per cent.

Labour's Matthew Bunday was squeezed and his party';s vote nearly halved on 2017. Malcolm Wallace for the Greens also polled well increasingly the vote from 1,300 to 2,200.