Flick in the News: Conservative Home 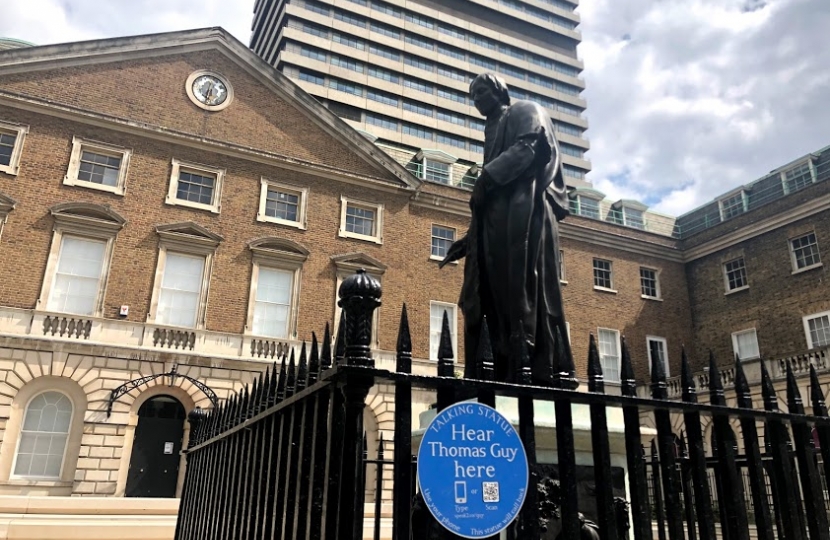 Flick Drummond: Putting new diverse statues near to those of old slavers. And other ways of sharing our journey.

In 1984, George Orwell wrote about how the regime constantly destroyed or falsified records, rewrote books and renamed streets and statues to enable history to be stopped with the aim that “nothing exists except an endless present in which the Party is always right”.

I fear Sadiq Khan hasn’t read the book – otherwise he would not have named his own attempt at cultural vandalism in the name of progress the very Orwellian-sounding ‘Commission for Diversity in the Public Realm’.

Khan has made it clear, in classic Doublespeak, that he will not be making any decisions himself about whether statues or road names in the capital offend, or if they should be removed – i.e: erased – except with the heavy hint the slavers will soon be gone.

Of course, life doesn’t completely imitate art. Such initiatives as a mayor wanting to enforce his world view on a two thousand year old city because he feels it’s not inclusive can seem perfectly reasonable – especially with the laudable aims of the Black Lives Matter campaign in the background.

In that respect, I agree with Khan. It would be good to have more statues of women and of BAME members because that’s a better representation of London’s culture and, ahem, history. A statue celebrating the Windrush generation and their enormous contribution to Britain, for example, would be good.

But what about these terrible (by our standards) dead men’s statues now in the firing line? John Cass at London’s Metropolitan University, a certain Thomas Guy of Guy’s Hospital fame and William Beckford at London Guildhall. Most have links to the country’s slave trade. Beckford owned slaves in Jamaica when slavery was legal.

Now, I just stated a fact there. That these two merchants owned slaves before Britain abolished the trade in 1807 and abolished slavery itself in 1834.

But I felt myself hover over the keyboard and think: “Do I need to say that? It might cause offence. No-one wants to hear these men acted within the laws of the day.” But I’ve left it in, because we all need to acknowledge that, in a perfect world, slavery should never have been legal – except  rhtit was, and that’s the reason why Khan’s announcement he intends to embark on historical airbrushing – Ministry of Truth style – is a self-defeating nonsense.

If we go back to Orwell’s passage, he makes a point it seems Khan and quite few others cannot or perhaps, more accurately, do not want to see: that the biggest danger in removing statues of now reprehensible dead men is the loss of our ability to understand our past, and crucially, not repeat it. We simply can’t pick and choose our history.

Up in Edinburgh, there’s a campaign to pull down a statue of one Henry Dundas, who delayed the abolition of slavery in Scotland. I fear if his statue is removed, this tangible (and free) reference point to his view; how he came to it and how, ultimately, he was defeated, will be harder to explain or impossible, because it will either be in a museum or destroyed.

Now, does it really matter when the end product is that people will not be offended by this man’s 200-year-old wrong-headed view because they don’t have to see him anymore? Well, it does.

I can’t believe that anyone would think enslaving black Africans was a good thing but, if our now-unacceptable reference points are removed, where will be the continuing debate? What will be our guide, if all that is now wrong is gone or hidden away? We will live, as Orwell feared, only in the present. The past will be some murky fog.

We need to put plaques on the plinths of all these slavers explaining what they did, both good and bad. The founder of Guy’s Hospital did a good thing all those years ago. It has saved countless lives, black and white. His life is not good or bad. It was good and bad. We should resist with all our might making it a binary debate. His world view is not our world view. His statue, once a celebration, is now a warning. Leave it where it is so we can all understand.

But we must be careful where this takes us.  Do we mention on George Orwell’s statue at BBC Broadcasting House that his ancestors were slave owners?

All this will require bravery, not virtue signalling, about our past, Mr Mayor. If we look to confront it together as a multi-cultural society with all the educational materials, including statues of slavers and imperialists, we can muster to make a case for a better country.

I would erect other statues close to these old slavers to explain the counter story. Wouldn’t that show (oh, the irony) London’s rich diversity and our continuing quest to mark our history? I would run education classes explaining who these people were and how, three hundred years ago, these men did not even consider black people to be human – they were just commodities to be bought and used.

That’s something we must recognise because it’s a fact. I’m sure many had a clear conscience about it too and I know it makes all of us, at least, uneasy. But there’s a good news story here: we have moved on.

So have courage, Mayor Khan, to continue history in our capital, not through erasing it via a commission, but through new statues, through new names on new roads; through a recognition of the past and the role it must play in our future understanding and reconciliation of what has always been our shared history.

Great to be in the House of Commons chamber this afternoon to listen to the Chancellor deliver his plan for jobs. This will be worth as much as £30 billion, which is on top of the £160 billion plan already in place to protect businesses and jobs during the pandemic.