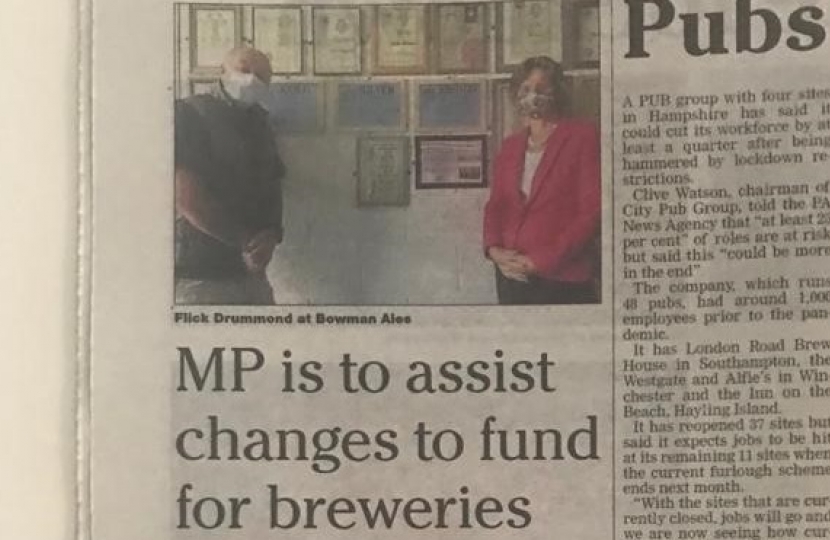 MP is to assist changes to fund for breweries

First published in print and digital in the Hampshire Chronicle: https://www.hampshirechronicle.co.uk/news/18777093.flick-drummond-ask-n…

MEON Valley MP Flick Drummond is to ask the government to reconsider its planned changes to Small Breweries’ Relief (SBR) after being told it would devastate independent breweries in Hampshire.

Flick was told by Martin Page, director of Bowman Ales near Droxford, that the plans to reduce the threshold where brewers pay a 50 per cent reduction in beer duty from 5,000 hectolitres (hl) a year, or 900,000 pints, to 2,100hl was an even bigger threat to the industry than Covid.

The comments were made when she recently visited Bowman, which brews beers such as Swift One and Meon Valley Bitter, and employs six staff.

“I very much agree that the SBR in its original form was a progressive system of taxation that has created a tremendous explosion of independent craft beer making in the UK and allowed breweries to start up, grow and thrive,” said Flick.

“The knock-on effect of this has been increased employment and entrepreneurship – often in rural areas – and a building up of expertise that could be lost if the government doesn’t get this right.

“Any punitive tax regime is clearly going to have very serious consequences for small independent brewers here in Meon Valley, across Hampshire and nationwide, especially during the pandemic when brewers’ major customers – pubs – have largely been closed or are working at reduced capacity.

“I will be passing on these concerns to ministers and urging them to drop the hl reduction or, if that’s not possible, to look at lessening the tax burden sufficiently to allow these breweries to survive.”

Flick was also told by Mr Page that covid-19 had forced Bowman to drastically change the way it conducts its business away from wholesale to retail.

During lockdown, the company started a home delivery service and was overwhelmed by the support from the community.

However, Bowman is still trading at about half the rate it was this time last year and a number of small pubs the firm previously supplied have folded since the outbreak.