Flick speaks out against modern slavery 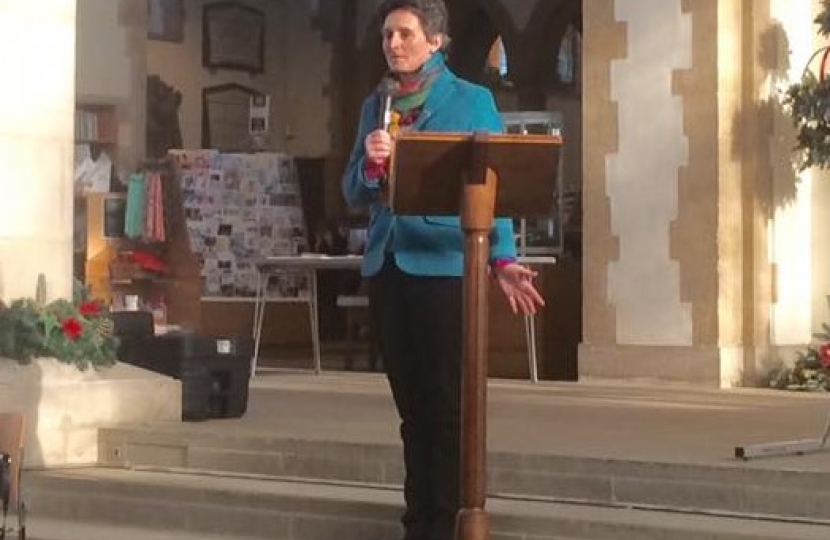 I was pleased to take part in a training event at Portsmouth's Anglican cathedral on Saturday looking at modern slavery. Slavery is still a big problem in the world, and in first world countries where people come here, or are brought here by traffickers, and end up in conditions of slavery. I spoke about the legislation this government has brought in to combat the problem. It is a personal priority of Theresa May's, and has been throughout her time at the Home Office and in Downing Street. It was a great event organised by the Diocese of Portsmouth, which is a member of the Hampshire and Isle of Wight Modern Slavery Partnership, and it was supported by Stop the Traffik, Hampshire Constabulary, Caritas, The Clewer Initiative, the Medaille Trust, and Barnardo's.

This is my speech:

"Thank you for inviting me to contribute to this important event. It is a pleasure to be here, and to hear about the work being done against modern slavery.

Getting the Modern Slavery Act onto the Statute Book through the last Parliament, was something the Prime Minister was absolutely committed to doing during her time as Home Secretary.

Her interest and drive in tackling modern slavery have perhaps been overshadowed by the harder-edged “national security” issues every Home Secretary has responsibility for. But I am in no doubt that it is a real, personal commitment on her part.

The Modern Slavery Act was a measure which drew support from across the parties. The penalties under the Act are tough, with a maximum of life sentencing in the worst instances.

But this is not just about catching criminals. The result of the Act is to put the victim at the centre of the strategy, and the really important statistics are the ones about them. It is not just about “being tough on crime”.

The National Referral Mechanism is a long established way of helping victims of people trafficking and modern slavery. The NRM process gives victims an initial 45-day ‘reflection and recovery’ period.

During this time their case will be assessed, accommodation will be provided for them, and no kind of immigration enforcement action will be taken.

We can be concerned at the number of cases being referred, but at the same time accept that it is good that more people coming into contact with victims, recognising the crime and that there is a framework for helping those victims move forward.

The government certainly does not think that this is all that needs to be done. In reality, we have to keep up the pressure on the criminals and networks who are still operating. With these offences, like any others, the criminals look for ways to evade the law. They don’t just give up and go home.

After becoming Prime Minister, Theresa May followed up her commitment to act against modern slavery by setting up a cross-government task force.

This brings together every government department with a stake in the problem to Downing Street under her chairmanship. The Prime Minister also commissioned an independent review by a barrister with expertise in prosecuting slavery offences, Caroline Haughey (Hockey).

Her review found that in its first year of operation, the Act fostered good progress. There were 289 prosecutions of modern slavery offences under it in 2015, and Caroline agreed with the assessment I mentioned a moment ago, of the 40% increase in the numbers of victims identified and helped.

Towards the end of last year, we also saw the report from the Independent Anti-slavery Commissioner, Kevin Hyland. Kevin specialised in modern slavery and people trafficking crimes in the later part of his 30-year career with the Metropolitan Police.

The Commissioner has a critical role, not just in this country, but in his collaboration with agencies in other countries to tackle the gangs at source.
Our Police and security agencies have vital capabilities to offer partners overseas, and we are often able to feed them intelligence about criminals operating out of their own countries, they would not have the means to collect themselves.

It is a measure of the seriousness of our approach to tackling the gangs involved that MI5, MI6, and GCHQ all have input to the Cabinet Task Force, and are supporting the Commissioner’s efforts in partnership working.

The Commissioner has himself obtained, free of charge, cutting-edge software called Memex from the US defence research agencies, software which analyses internet traffic to identify websites, and people engaged in activity which it would be worthwhile investigating.

In his report, Kevin Hyland set out a number of priorities for the coming year, which the government fully supports.

Remembering that the victim is at the heart of our approach, the first priority is identifying and caring for them. Individual victims are more likely to be identified by the government agencies they come into contact with, than as a result of a gang-busting operation. Awareness of the symptoms on the front line of public service is vital.
The Commissioner is working with the NHS and local authorities, to improve training for their staff to identify victims in their every-day activities. UK Border Force are important in the area too, but I will come back to them later.

It is particularly important, that agencies look out for child victims, and the Act introduced a trial system of Independent Child Trafficking Advocates. After a review of how they have been able to help across 23 local authorities, the scheme will be rolled out to provide coverage across England.

The second priority will be to improve the approach of law enforcement agencies.

It is important that they recognise the victims of modern slavery when they come across them, for instance where people are trafficked for illegal activities such as working in cannabis farms.

The Modern Slavery Act created a specific protection from detention, or prosecution for victims of modern slavery forced into criminal acitivities.

It is important that Police forces record modern slavery offences for what they are, so that we can track progress. The Act gives the Police new scope for tackling the crime, and they are responding brilliantly.

But elsewhere across the criminal justice system, the training of lawyers and judges has to keep pace with the change. It is important that Police and Crime Commissioners include tackling modern slavery in their Policing Plans.

I know that our own PCC Michael Lane takes the issue very seriously, and he touched on it in a speech he made at St John’s College in Southsea on Thursday.

The third priority is partnership working, combining the intelligence and resources of bodies I have already mentioned, with the wider community.

Churches and mosques are among those who we need to engage as well as the enormous range of charities who work with vulnerable people.

This is work which reaches out to other countries, not just through law enforcement but also through the third sector. It raises awareness of the crime internationally.

The fourth priority is to educate business. Modern slavery often hides behind a façade of respectable business. People engaged in modern slavery are there on the High Street alongside legitimate businesses, and even doing business with them.

We have to make sure that companies are aware of their obligations to watch out for the signs of modern slavery in their supply chains, and to report them. There are some particular sectors where modern slavers operate.

I don’t want to single out nail bars and hand car washes unfairly, but they are examples of small businesses operating in plain sight where victims have been discovered.

But any sector with a long supply chain is at risk of infection, and the Modern Slavery Act imposes reporting duties on bigger companies too, to make sure that their supply chains are not infected.

Awareness in the financial services sector is important, because there are international flows of money associated with this business which can identify criminals and lead to their arrest.

And that brings me to the final priority of international co-operation.

The list of home countries of victims identified last year ran from Albania to Vietnam. The Prime Minister will soon be getting a new assessment from the Commissioner, of what more we can do to help governments overseas.

The biggest contributing countries of people coming through the National Reporting Mechanism are Albania, Nigeria, Vietnam and Romania.

Fighting modern slavery is an activity of tremendous breadth and depth, covering all our public services and countries around the world.

It is a global development issue too, with support for governments being delivered by our Department for International Development. Tackling modern slavery is one of the Sustainable Development Goals.

Our 0.7% aid target supports this, and channels an additional £30m into fighting modern slavery this year in the developing world.

But here in Portsmouth we have a particular interest, as the second-largest cross-Channel ferry port. While we are never going to be a container port on the scale of Southampton, we have freight capability and traffic.

So the covert transport mechanisms are there for people engaged in modern slavery, as well as people trafficking and general smuggling. The number of potential victims has grown, and particularly of unaccompanied children.

I am pleased that the UK Border Agency is among the law enforcement bodies which is benefitting from enhanced training in recognising those at risk, and recognising that they are victims of a crime rather than illegal migrants.

I know that among the organisations here today, and many others in the community locally, the victims of modern slavery offences have friends and supporters.
I am always ready to help in any way I can, through my work in Parliament or here in Portsmouth. If there are issues around modern slavery or anything else, I hope you will let me know."