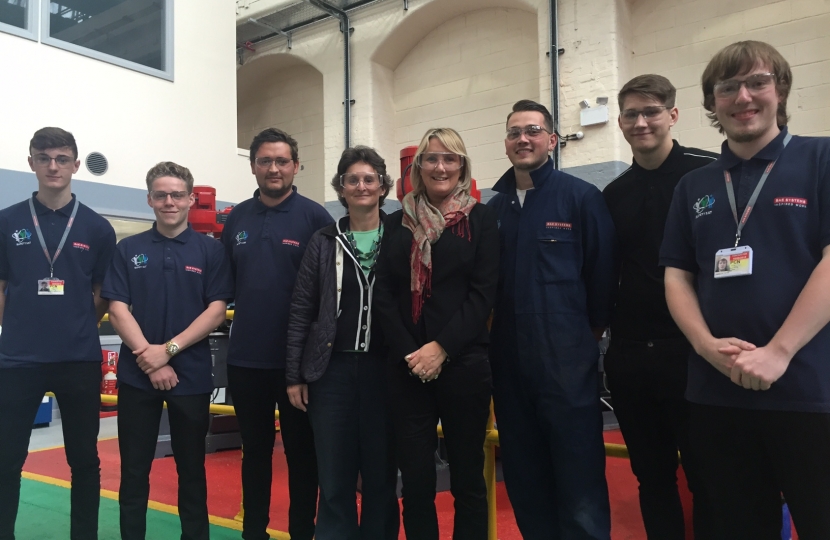 Portsmouth South MP Flick Drummond was joined by Gosport MP Caroline Dinenage on a visit to Portsmouth Naval Base where the pair met with apprentices from BAE Systems.

The politicians went to see the new skills training centre which trains 50 apprentices each year and spoke with the young people on four-year courses learning skills such as electrical engineering and fabrication.

Afterwards they visited the ship hall, which is being used to refurbish Royal Navy mine hunter vessels.

Flick and Caroline were also briefed by the Royal Navy about the latest developments in the preparations for the arrival of the two new aircraft carriers to Portsmouth.

‘It was great to see so much high quality work being undertaken in the naval base, especially with regards to the minehunters that will undergo work there,’ said Flick.

‘Meeting the apprentices was also a pleasure. These are very able young people who got a place with BAE in competition with 49 others who applied for each position. It goes to show the depth of talent we have and it will help Portsmouth and Gosport prosper in the future.

Caroline said: ‘Having such a high technology company as BAE in our area which is training the next generation of technicians and engineers is a real boost for the local economy.

‘I know that many people in Portsmouth and Gosport are also looking forward to the arrival of the aircraft carriers in the coming years and this will be a source of great pride for both sides of the harbour.’