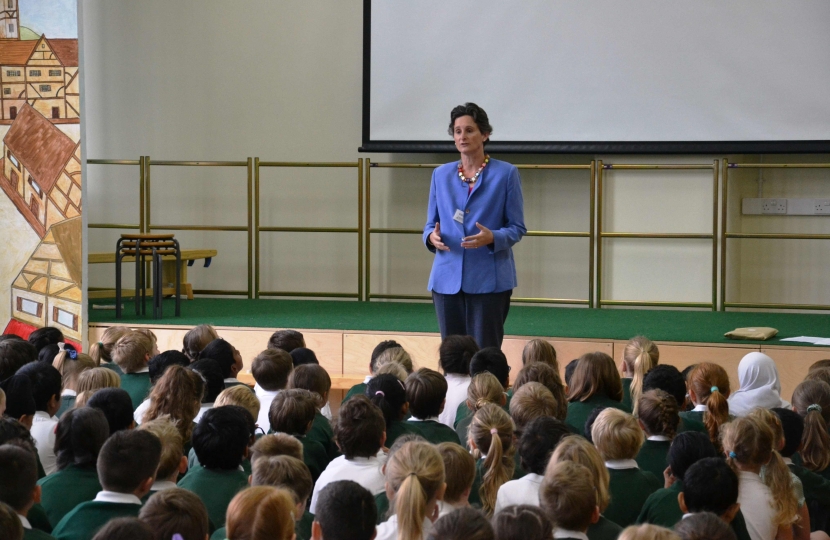 On her first day, in her first speech as Prime Minister, Theresa May was absolutely right to say outside the door of 10 Downing Street that “If you’re a white working-class boy you’re less likely than anybody else in Britain to go to university.”

If we want this to change, we have to go right back to the beginning.

New research launched today shows that Portsmouth South, my constituency, has one of the biggest gaps between boys and girls meeting the expected standard of early language development at age five. Last year, whilst 80% of all children met the expected standard, only 73% of boys did, compared to 87% of girls.

As the Prime Minister says, we must start to address the problem that whole groups of children are being left behind and forgotten. This will have a huge impact on their lives as adults and on our society. I want each and every child to have the opportunity to do well at school and fulfil their potential. This new evidence shows that too many are being held back, through no fault of their own.

The research commissioned by Save the Children from the University of Bristol estimates that if boys performed as well as girls in Portsmouth South, then 84 more boys would have reached the expected standard in early language and communication at age five last year. This is equivalent to more than two whole school classes.
Worse still this gender gap at age five has not changed over the last decade.

It’s likely that the higher levels of disadvantage in Portsmouth compared to the national average are driving some of this underachievement. We also have a high proportion of adults with lower educational qualifications who may not have the time, income or capacity to provide a good home learning environment for their children. This is one of the reasons why I am so pleased that Portsmouth is a pilot scheme for 30 hours’ free childcare, targeted at low-income households.

The picture nationally is similar. Across England boys are nearly twice as likely to fail to meet the expected standard in early language development at five as girls. And it’s the poorest boys who are struggling the most, with 38% not achieving the expected language skills by the age of five.
This can have a major impact – limiting a child’s future chances of success and potential. Unless children start school with the building blocks of learning, particularly early language development, they struggle to pay attention in the classroom, to follow lessons, interact with their classmates and develop key skills like reading and maths.

What is particularly worrying is that this pattern of underachievement can continue to GSCE level and beyond. The Institute of Fiscal Studies have found that cognitive ability in the early years is strongly linked to income levels at age 30.  With so many more boys falling behind, I’m concerned about what the future holds for them and the opportunity we’ve missed to turn things around.
I mentioned early that the average proportion of children meeting the expected standard is 80%, but among the poorest households, that falls to 72%.

So what can be done to level the playing field and ensure all children start school ready to learn? Let’s make a concerted effort to understand that childcare is part of the quality education we provide our children, and put the same efforts and investment into it. The Government is rightly focusing on raising school standards and putting academic rigour at the heart of our education system. It’s now time that a similar level of ambition is placed on children’s learning outcomes while they’re in nursery. Good teaching and leadership is crucial for the success of our schools, but it can be decisive in nurseries too because it boosts the early language skills that are so crucial to do well in school. If we did this we would heighten school attainment, particularly for those groups who are falling behind.

Graduate early years’ teachers in good nurseries can make all the difference. They lead the delivery of the early years’ curriculum, and they lead the professional development of nursery staff. They also observe children’s progress and design tailored packages of support for children at risk of falling behind.
Most significantly for areas such as Portsmouth with high levels of poverty, early years teachers are trained to engage with parents to improve their home learning environment.  With parents being the biggest influence on their children when they’re little, these efforts could rapidly increase children’s learning outcomes.
This Government has demonstrated a commitment to childcare reform to boost social mobility and tackle disadvantage, but with only two in five private, voluntary and independent nurseries employing any early years’ teachers, it’s clear that there is still a long way to go.

It’s vital that the new Government continues firmly on its path to increase life chances with a bold vision for the future that includes a world class childcare system that boosts the wellbeing and opportunities not just for the privileged few, but for every child.