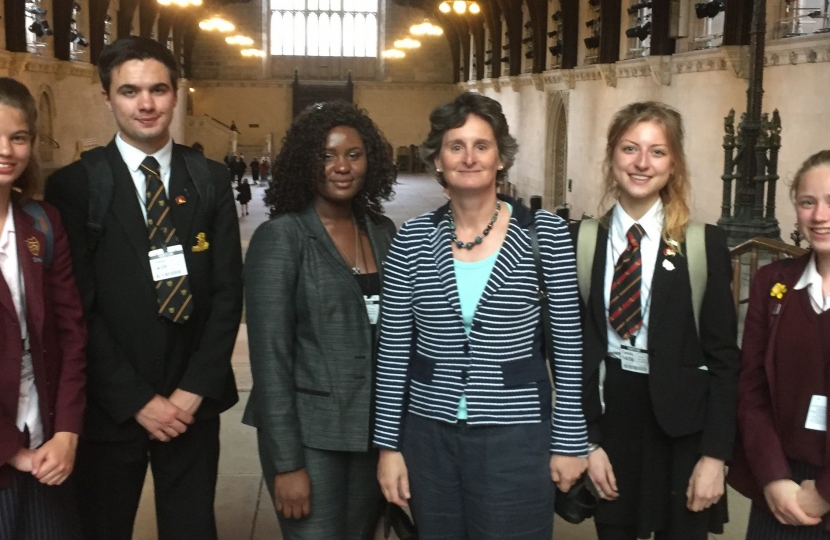 Five students from Portsmouth schools visited the House of Commons this week and were hosted on a tour of the building by Flick Drummond, Member of Parliament for Portsmouth South.

The students were visiting the House of Commons to attend an All Party Parliamentary Engineering Group debate on Artificial Intelligence, hosted by Professor the Lord Broers. The trip had been organised by Rod Edwards, Chief Executive of the Young Engineers charity, who accompanied the students to Parliament.

Rod said: “I often have the opportunity to take young potential engineers from the Portsmouth area up to these APPG Engineering debates and dinners in Parliament, and I am always massively encouraged by the maturity and motivation of the young people from our city.  Two of the best and most thought-provoking questions of the evening were asked by girls from Portsmouth schools.  The opportunity for these young people to hear from such eminent engineers is highly motivational for them.  The students this week were especially lucky as they also had the opportunity to have a personal guided tour of Parliament from Flick Drummond, and an opportunity to talk to Penny Mordaunt, ahead of the APPG debate, so it really was an outstanding day for them, jammed in between their exams!”.

Flick Drummond said: “It was a real pleasure to meet the students from Portsmouth schools earlier this week. It was a valuable opportunity for me to hear about their studies and career ambitions. It is really important that young people from Portsmouth get the opportunity to visit Parliament to learn about how Government works. The Palace is also full of history and I hope the students had a memorable experience”.