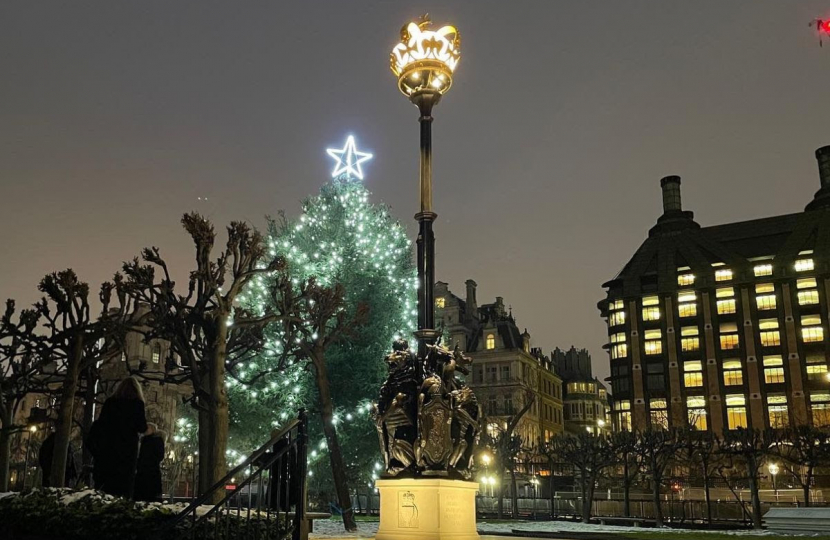 It has been freezing in Westminster. I am in one of the old buildings and the heating does not extend to my office on the 5th floor so we have a portable electric radiator which takes time to warm up when I arrive in the morning.

So it was good to get out of the office while it warmed and go down to meet Alresford and Cheriton Scouts who managed to brave the cold on Monday and it was a delight to show them around. When I asked if any of them would like to be an MP, they said that the hours are too long. That is true but it is such a privilege to work here and so interesting that the days pass very quickly.

They are especially fast now I am on two select committees. There is a lot of reading, especially for the Public Accounts Committee which looks at two reports a week.

Next week, we will be questioning His Majesty’s Passport Office. As we had a lot of correspondence on this, it is going to be interesting to hear its views on what went wrong and whether it agrees with the National Audit Office’s report. Thank goodness for the MPs’ priority line as we managed to get most people sorted before they had to travel.

Apparently, the office was texting people to let them know that their passport was running out so people could renew it in good time. I suspect most people thought it was spam. Do let me know if you received one of the texts as I am curious as to whether people took any notice. You can follow the work of the Public Accounts Committee on this link.

The Prime Minister has been focusing on a response to the small boats issue particularly to break up the business model that puts so many poor families into debt. This was brought sharply into focus on Wednesday with the death of illegal immigrants and asylum seekers on a small boat. Just the sort of tragedy we must work hard to avoid.

I am very pleased that we are taking a tough line on Albanians who leave a safe country presently being denuded of many of the fittest and capable people. I am also pleased that the Prime Minister is committed to processing the applications of asylum seekers as we need to get them out of hotels and into work so they can contribute to our economy.

We passed the Levelling Up Bill on Tuesday. I wrote about the significance of the backbench changes in a previous weekly roundup especially on Amendment 21. I am very pleased local councils will have more influence in how many houses, what type of houses and how many are affordable. There is a marked difference in how this Government is listening and working with backbenches compared to previous ones and we are much happier for it.

King Charles visited to unveil the plaque commemorating the Queen’s lying-in state in Westminster Hall and also the two lamps that MPs and Peers paid for out of their own money – this is not something that can be put on expenses. I am looking forward to showing constituents when they visit. One person on Facebook complained I should be working and not showing people around.

I go up to London on a Sunday evening so I can keep some time free on Monday mornings to do visits – other MPs travel in on a Monday morning as we don’t start in the Chamber until 2.30pm. We vote at 10pm on a Monday so there is plenty of time to work and taking 1.5 hours out of the day to meet and chat to constituents is a joy for me. Sometimes, we have official tour guides, such as on 27th February 2023, so I will meet everyone afterwards to answer questions.

Today, I visited Royal Mail to thank them for working hard and talked about the strike. They are concerned about the change in hours, including working on Sunday to compete with the parcel delivery companies. I will chase this to see whether there is anything I can do to help.

We all have a relationship with our wonderful posties as they work so hard in our communities. I am disappointed about the other strikes, unions asked for an independent pay board to set workers’ pay but seem to think that the government should now set it. Our nurses do deserve to be well paid and receive pay rises when others have not over the last year, but 19% is unaffordable and I hope they come to a compromise soon.

The best part of today has been given a book token to each of the three Christmas card winners. It was a hard choice but I think you would agree that all are splendid. Above is the winning entry from Tilly Harris-Pritt.

Next week we start recess on Tuesday so I will not be writing another weekly roundup until our return at the beginning of January. I wish you and your family much joy this Christmas and a Happy New Year. Let’s hope that 2023 is a boring political but productive year.

Yesterday I spoke in a Westminster Hall Debate entitled 'Government support for Apprenticeships'. There were 860 people starting an apprenticeship in the last year in my Meon Valley constituency and I have met many of them in my work with businesses of all sizes.