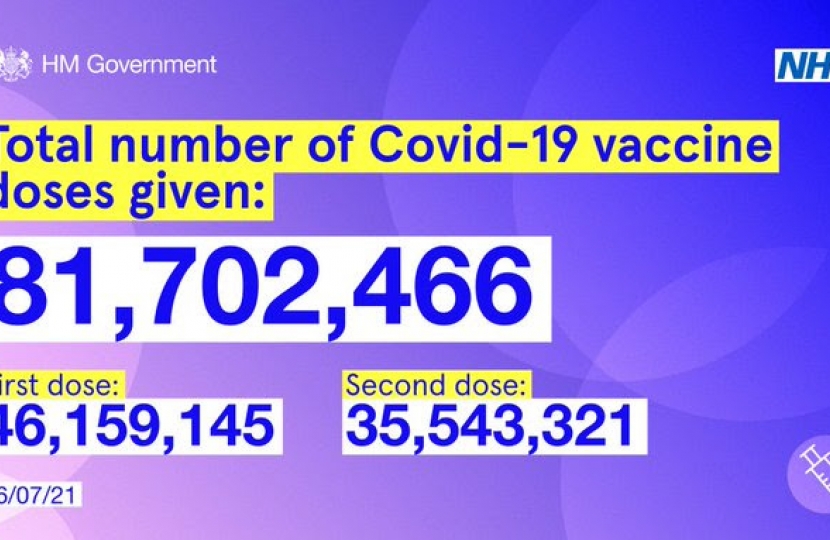 It has been a varied week both in Parliament and in Meon Valley.

The lifting of restrictions is now confirmed but I would urge everyone to be cautious. Cases are going up and we do not want to go into another full lockdown.

I will continue to wear my mask in crowded areas and on public transport, not least because I am up and down to Westminster and meeting people. I regularly do a LRF test so I feel safe to go out into the community.

I talked to those organising the Hampshire vaccination programme and response yesterday and we are doing extremely well with vaccinating Hampshire people but not enough aged 18-30  are coming forward so I urge anyone you know to get their jab. We will only stop the spread if everyone is vaccinated.

On Monday, I chaired an online seminar in my role as co-Chair of the All-Party Parliamentary Group on Women, Peace and Security to talk about Afghanistan. The Afghan Ambassador to the UK was joined by one of the four female negotiators in the peace talks in Afghanistan, a human rights activist in Kabul and a human rights lawyer in Islamabad.

The Afghan Ambassador reminded us of the huge achievements for women over the last 20 years in Afghanistan including the training of 70,000 female teachers and 4000 midwives as well as their active role in civil society. This was in stark contrast to almost no women teaching in 2001 and only 450 midwives.

I do believe our role in Afghanistan has not been wasted but I am very concerned about the future. Fatima Gailani, the negotiator, was more positive than the other speakers about what can be done, saying that the Taliban do not want to be the pariahs in the international community that they used to be. I hope she is right. but we will see.

On a personal level, there was a very difficult vote in Parliament the next day when the Government brought forward legislation on our international aid budget. I supported the temporary reduction to 0.5% and I have been assured we will be increasing the budget back to 0.7% as soon as our finances allow it.

We are still the second biggest contributor in the world with £10bn of overseas development aid plus other aid initiatives such as Covax, which will give Covid vaccines to the rest of the world. It is a difficult balance to ensure that our NHS, schools and social care are funded alongside helping the poorest in the world in these unprecedented times.

The Health and Social Care Bill has started its way through Parliament. It will now go into committee stage where there will be amendments and I will watch it carefully. I hope that there will soon be an announcement on social care funding, which was in our manifesto and needs radical reform.

I graduated from the Royal College of Defence Studies at a graduation ceremony on Wednesday afternoon. It has been a fascinating year learning about making strategy alongside many other nationalities, including one from Afghanistan. He is now returning to Afghanistan where he is hoping to make a difference and push for a functioning democracy. He is a very brave and honourable man.

On Thursday, I visited Waterlooville Golf Club where I met two Kickstart employees (a government initiative to get young people into work) and heard about their environmental plans, including rewilding some of the rough areas.

I also met with Sue James to talk about The Great Big Green Week in September to celebrate what we are doing about nature, tackling waste and action on climate change in the lead up to COP26 in November. There will be plenty of events during that week to get involved in.

I also went on to meet some local shopkeepers including the Co-op in Milton Road in Waterlooville, where I heard about the impact of the lockdown and about the safety of shop workers. I was pleased to meet the store manager, Harrison, and thanked him and his team for their hard work for people in the community.

The day ended with a meeting where I listened to disabled people who are against the Assisted Dying Bill and further meetings on boundary changes.

My survey on a longer school day for children to allow for a broader curriculum is still open - please do contribute here if you have a view on how we can help children's education recover from the pandemic.

Have a great weekend. It’s going to be a hot one.

Meon Valley MP Flick Drummond has criticised campaign groups like the RSPB for misleading the public about the Government’s environmental record.