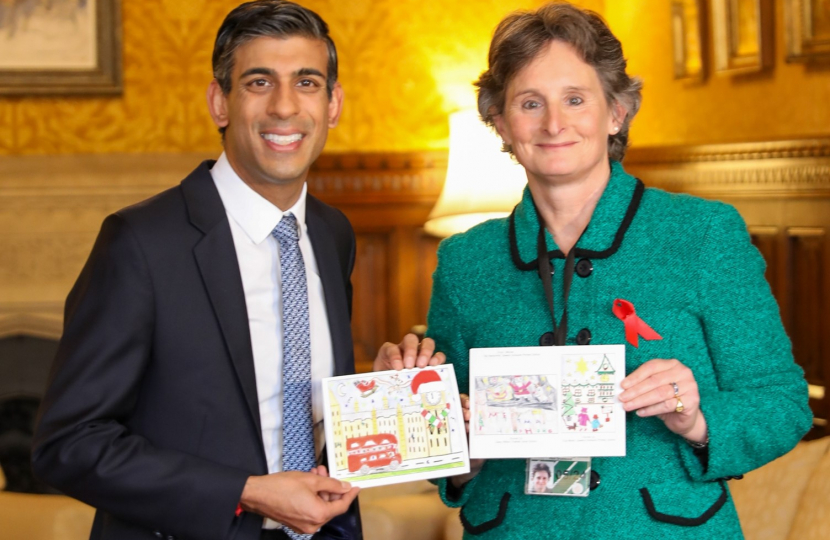 Firstly, the deadline to appeal about boundary changes that will abolish Meon Valley constituency is 5th December. Here are the details if you would like to do so or ask for the potential new Fareham and Waterlooville constituency to be called Forest of Bere. This seems to be a very popular name.

It was lovely to see so many members of Cowplain Social Club on Monday when I showed them around Westminster. They came up by coach and it seemed to work well.  I hope we can have a full coach on 27th February. Contact my office if you would like to book a seat on it. The cost is £21 return and it includes time to sightsee as well as tour the palace.

I also discussed my ‘Older Person Advice Fair’ with someone who is helping to find stall holders. This will be in Wickham Community centre on 3rd February from 10.00 - 1pm. The event will be full of advice on the types of care options, dealing with the cost of living, pension credit and many organisations who help make older people’s lives easier.

We had more Second Reading of the Finance Bill on Wednesday this week so we could put all the changes the Chancellor put forward in his autumn statement. This meant five votes on Wednesday when I was supposed to be chairing an important education meeting with all the chairs of the Education commissions that have published this year.

It was very irritating as I had been looking forward to it. Five votes take about an hour and there is not enough time in between to do anything. These votes had not been due until 7pm so you can understand my frustration that the debate finished early. We are always on a three-line whip for most of the day in case it happens which means you cannot leave the building.

On Tuesday I met one of my heroes, Jane Goodall, following the Trophy Hunting Bill which I spoke about last week. She has done amazing work with chimpanzees as well as other conservation work. Sadly, we didn’t have much time to sit down and spend time talking as various television companies were interviewing her.

I had my third ever Prime Minister's Questions on the order paper this week, at other times I have had to bob. It is done by ballot and I seem to be very bad at getting on any departmental question time. I am very concerned many children are being ‘off rolled’ from Schools, i.e. they are no longer registered as a pupil because they don’t want to go and their parents say they will home educate them.

There are an estimated (and no one knows the true number which is worrying in itself) 115,000 children being home educated. No-one monitors what they are doing or their welfare. There are plenty of extremely good parents educating their offspring at home, but there are plenty that are not. Only a register will give an accurate picture and enable Local Authorities to check up on these children. The government seems to have backtracked on this commitment so I am chasing it.

Yesterday I visited RAF Waddington where ISTAR is based and learned about how they obtain intelligence and the latest equipment. The new unmanned aircraft, Protector, is going to be a game changer. I spoke to some of the air specialists serving on the Rivet Joint (a surveillance and intelligence gathering plane) that had a close encounter with Russian fighter jets recently over the Black Sea. It was very worrying. They now have Typhoons accompanying them for protection as they have no weapons. These visits are very useful although they mean a very early start.

Lastly, I can announce the winner of my Christmas card competition this year. Tilly Harris-Pritt aged nine from Queens Inclosure Primary School won with a brilliant design of the Houses of Parliament and Big Ben in a Santa hat and scarf

The runners up were Cruz Moret aged 11 also from Queens Inclosure School and Daisy Wilson also 11 from Padnell Junior School. Their designs are on the back of the card. It was lovely to share their artwork with the Prime Minister and he was impressed. I will be visiting their schools near Christmas to give them their presents.

This afternoon I attended a memorial for Neil Lander-Brinkley - many of you will know him as a Denmead Parish Councillor but also the Meon Valley Conservative Chairman for many years. He was an amazing man who never sought the limelight but just got things done and was incredibly kind to me. It is volunteers like Neil who mean we have a democracy and it is very hard work.

I am now off to meet with the Waterlooville District Explorers this evening.  It is Small Business Saturday tomorrow which will enable me to rush around the constituency buying my Christmas presents, please support them too.

Yesterday I spoke in a Westminster Hall Debate entitled 'Government support for Apprenticeships'. There were 860 people starting an apprenticeship in the last year in my Meon Valley constituency and I have met many of them in my work with businesses of all sizes.