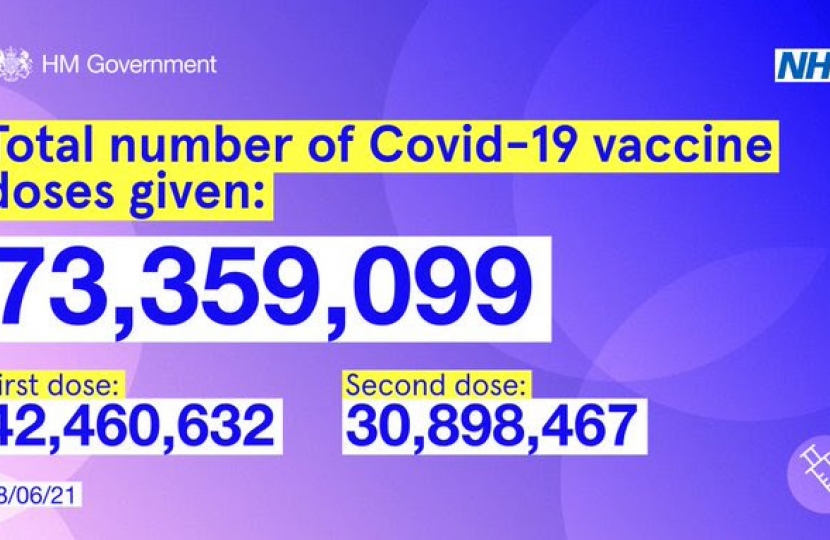 Sadly, the country had not met all four tests to proceed with the next step of the roadmap and the number of infections is doubling every 11 days – mostly in younger people. Getting those over 18 vaccinated will make sure that the majority of the population are inoculated and help us return to normal.

Thank you to everyone for your patience, at some point soon we are going to have to live with this virus and work out how we do that. Until then, the 19th July is the next important date.

This week we agreed a free trade deal with Australia. This means eliminating tariffs on all UK goods to Australia. Having lived there, I remember the price of UK goods being very high as import taxes were put on many products from all around the world.

It is a relatively small deal but that’s not the point. It shows Britain is able to negotiate them and become a major trading force in its own right. There will be more deals in the coming months and years. The doomsayers said the UK could not do it when we left the EU or that it would take years – they were wrong.

A major trade prize will be joining the Comprehensive and Progressive Agreement for Trans-Pacific Partnership (CPTPP) of "Pacific rim" countries, and this Australia deal is the catalyst for that. This will open up a huge market for British goods and services in a vast area of the Earth and drive growth, jobs and investment across the country.

The Prime Minister reported back on the G7 and NATO meetings this week and I am confident that we play a major part in global leadership. We face many threats not only from Russia and China but more insidious attacks from cyber, social media disinformation as well as non-state actors including ISIS, Al Qaeda and other terrorist organisations. Our aircraft carriers are helpful to show that we are still prepared to defend our allies.

The fate of women in Afghanistan is something I am very concerned about especially when the US and the UK leave the country. I am the co-chair on the All-Party Parliamentary Group on Women, Peace and Security and so I asked the PM what he thought – you can find it here.

I am very pleased to be able to co-sponsor a Private Members’ Bill on Downs Syndrome. This will improve the life chances of many people and provide better education, health and jobs as well as raising awareness of Downs Syndrome.

Two people - Ken and Rachael Ross - have worked so hard to make this bill happen and they live in Meon Valley constituency. I have known them for many years and I was delighted Rachael received a well-deserved MBE for her work with Portsmouth Downs Syndrome Association. The Bill has had its first reading in Parliament and second reading will be in November.

On Friday, I had a great afternoon with Gary McCullough, who is the community safety officer for Swanmore and other surrounding villages. Although he has only been in place for 18 months, largely during the pandemic, he knew exactly who all the children were and who needed a bit of encouragement to be well behaved. It is an excellent initiative especially as he can report on any issues to the council and police where necessary.

On Saturday, I returned to do litter picking with the fabulous Trash Busters in Jubilee Park in Waterlooville. Volunteers are amazing people.

Have a good weekend!