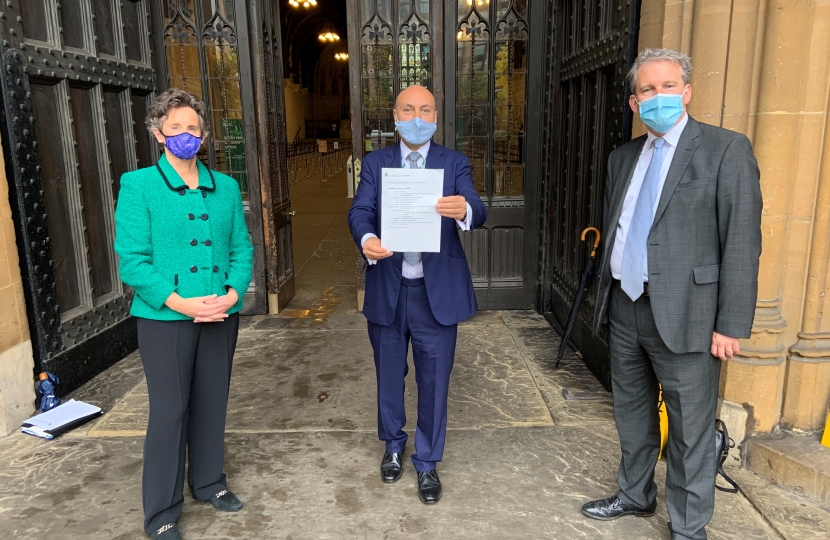 There was an awful lot going on in Parliament this week, from meetings to questions to headline-grabbing debates and also some smaller debates about local issues that are also very important. It is important to be busy, but I have to admit I am looking forward to the short recess next week! I will be using the spare time to do some reading and research to try and keep on top of everything. I am having to be careful about what I do this week having come home from a Tier 2 area so I will be making sure that any meetings in the constituency are held in a social distanced way.

I was pleased to have a meeting this week with the Business Secretary, Alok Sharma, where we discussed getting people back to work over the next few months and beyond that, when (hopefully) the risks from Coronavirus will have reduced. I know the Government wants to do everything it can to support businesses and help people retain jobs or find new ones. I also participated in a virtual group meeting with the Prime Minister, who gave us a brief update on how efforts to tackle the pandemic are going.

One avenue of support is £1 billion of funding being provided to local authorities to use at their discretion. I was delighted to be told that this week Havant Borough Council has been allocated £620,000 of this, with a further £100,000 going to Winchester City Council. This will not all be used in the Meon Valley (as both councils cover other areas too), but I have written to them asking that some of it be directed here. In particular, I would like to see Havant invest in places like Waterlooville and Cowplain to help with projects like the redevelopment of Waterlooville town centre.

Back in Parliament, the debate that received the most attention was Labour’s opposition day debate on free school meals. I know that some people are angry that I voted against extending the programme, but I have posted a detailed article on my website, which you can read here, that I hope explains my reasoning and takes some of the heat out of this discussion. People have every right to passionately disagree about politics, but it is important not to rush to attack people when actually a lot of the information on social media and elsewhere is very misleading.

There were also a few local issues debated that I was pleased to help with. I supported Andrew Griffith on his Ten Minute Rule Bill which would see tougher enforcement for vehicles with illegally obstructed or missing number plates. I know that this has been one of the issues in tackling noisy and speeding motorbikes on the A32 and elsewhere, so I really support this measure. This kind of Bill is unlikely to become law by itself, but hopefully the Government will take note and add it to some other legislation.

I also spoke in support of our neighbouring MP for Eastleigh, Paul Holmes, in his Adjournment Debate on accessibility for Hedge End station. Though this is just outside Meon Valley, I know that lots of people use it due to its large carpark, but unfortunately steps, narrow footbridges and muddy paths mean that it is not very accessible for people with disabilities. I am fully behind Paul in his efforts to change this.

Having been a little unfortunate lately in the question ballot, I was glad to get two this week. I asked about the Equality and Human Rights Commission on Wednesday – video here – and about reducing quarantine for international travellers on Thursday – video here. I am encouraged to learn that progress is being made on this issue, including testing at airports, which could really help the tourism industry, who I know are having a very difficult time.

There will not be an update next week due to the recess, but I will be back in touch on November 6th. In the meantime, enjoy your weekend and the half term. Keep well and stay safe.