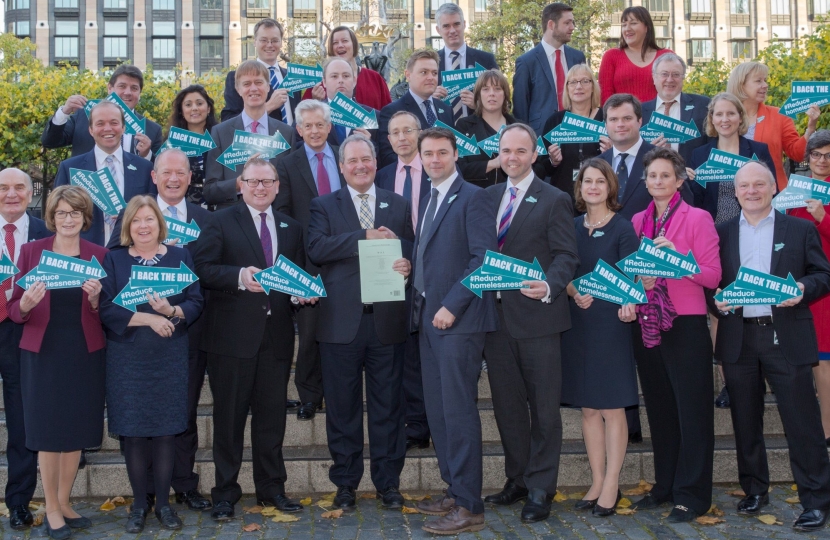 I have had the pleasure of speaking in support of the Homelessness Reduction Bill, which started its progress through Parliament today. My colleague Bob Blackman MP proposed the bill and it is supported by homelessness charities including Crisis, who I have worked with since before my election to Parliament. The picture above shows some of us who are backing the bill celebrating it getting a Second Reading so that it can proceed on its journey to becoming law.

The bill could transform the help available to homeless people in Portsmouth and right across the country. The Bill has the support of the government, and from all parties in the Commons. Here is the speech I made in support of the Bill:

"It is a pleasure to speak in support of the Bill, and I congratulate my hon. Friend Bob Blackman on bringing it forward. I thank Crisis for giving us so many updates.

Although I welcome the Bill, it is important to recognise the work our local authorities already do to help the homeless. Portsmouth City Council deserves praise for the way it works with the homeless across the whole spectrum. The number of families in temporary accommodation has fallen. The council’s housing options team already assigns a caseworker for each family at risk, but as other Members have mentioned—in particular, my hon. Friend Will Quince—our concern is that people have to go all the way to the point of eviction before an authority can help them.

Last week I saw three examples of people in that situation at my constituency surgery. One was a serving member of the armed forces. I therefore welcome clause 1, which redefines homelessness and gives protection to those at risk at an earlier stage than is currently the case in the 1996 Act. Replacing the current 28-day period with a 56-day period will give more reassurance to those in difficulty, and more time for preparing a plan of action. I hope that that will be of help to the people I have been seeing in my surgery, and in particular people affected who are in the armed forces; it is a disgrace that someone in the armed forces had to come to my surgery because he does not have somewhere to go when he leaves the forces next month.

I am also pleased that clause 2 reinforces the duty to provide advisory services, but it is not only the local authority that can provide advice; there are plenty of charities in the sector, such as the Roberts Centre in Portsmouth, which provides a tenancy support service. Last year the centre helped 86 families, and I am pleased that it is funded by the Government’s supporting people service.

Finally, as others have mentioned, clause 8 gives greater protection to care leavers, but I would like it to go further. I believe the state should be taking a parental role by looking after care leavers until the age of 25. Many parents, myself included, have children in their 20s who are still living at home. The state ought to do the same for care leavers. Care leavers should also be supported to move outside their local area if seeking work or educational opportunities. Those vulnerable young people need support wherever they go and live. I hope that will be taken into account in Committee. We know that they face many risks, and we can do something to reduce one of those risks with the Bill.

The charity Crisis estimates that reducing homelessness could free up £370 million a year of public spending. We also know from the Welsh experience that early action can prevent homelessness. I am therefore really pleased that the Bill enjoys support from all parties, and hope we can send a unanimous message from this House that we are all backing it today."