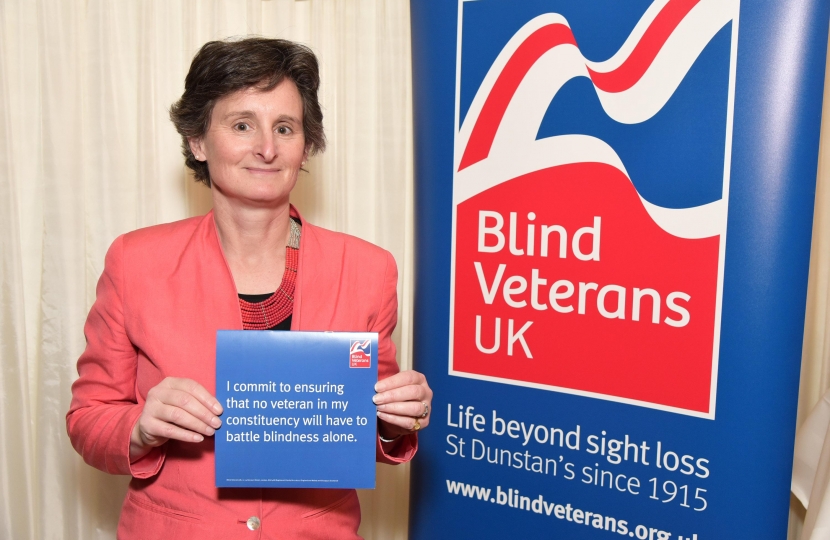 Flick Drummond MP has pledged to ensure that Armed Forces veterans will not have to battle blindness alone at a special parliamentary reception earlier this week, held at the House of Commons.

The reception, held on Tuesday 23 February, was organised by Blind Veterans UK, the national charity for vision impaired ex-Service men and women, to raise awareness of the charity and to encourage all local authorities to work with Blind Veterans UK to reach out to more veterans with severe sight loss so that they are able to access the charity’s free services and support.

Flick Drummond MP joined over 20 other MPs, including Mark Lancaster, Minister for Defence Personnel and Veterans, Kevan Jones, Shadow Minister for the Armed Forces, and Clive Betts, chair of the Communities and Local Government Committee, along with representatives from the military, local authorities, the NHS and other sight loss and military charities. They met with beneficiaries and staff of Blind Veterans UK to pledge their support to the charity’s beneficiary recruitment campaign.

Flick Drummond MP said: “As the MP for Portsmouth South, I am pleased to pledge my support to Blind Veterans UK by helping to ensure that no veterans in my constituency will have to battle blindness alone. It is vital we all work to honour the Armed Forces Covenant and make sure everyone who comes into contact with blind ex-Service men and women signpost them to Blind Veterans UK for free, lifelong support.”

Major General (Rtd) Nick Caplin CB, Blind Veterans UK’s Chief Executive, said: “We are delighted that so many MPs and key representatives from local authorities, together with military and health professionals attended the event and have pledged their support to ensure that blind ex-Service men and women can enjoy a life beyond sight loss.

“We currently support over 4,000 blind ex-Service men and women and their families, but we know there are many more out there who need and deserve our support. The event is crucial in helping us spread the word about Blind Veterans UK. We want as many MPs, local authorities and health networks as possible to work in partnership with us so we can reach out to the many veterans in need of our support.”

If you are, or know of, a veteran with severe vision impairment and would like more information about Blind Veterans UK’s free, lifelong support go to www.noonealone.org.uk or call freephone 0800 389 7979.