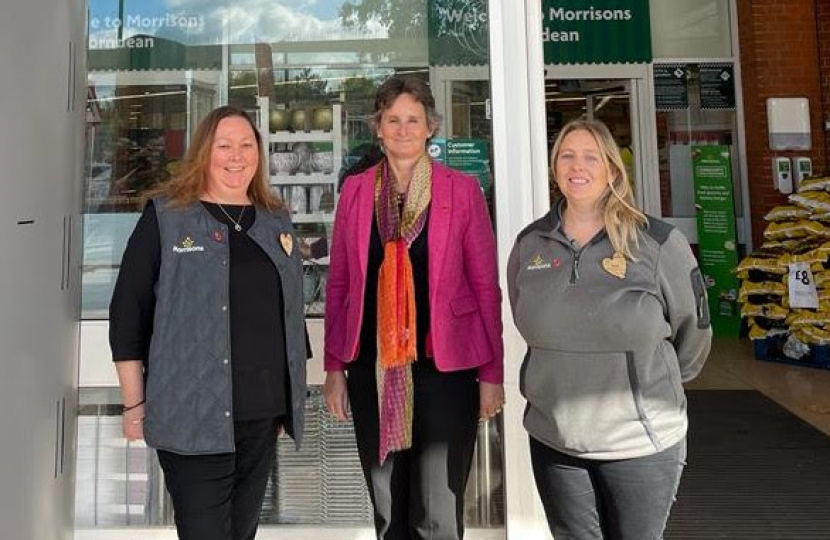 It is an extraordinary thought that Rishi has only been the Prime Minister for 10 days and yet it seems to be much longer. Parliament has very much settled down and is getting back to normal. There are fewer furrowed brows and exhausted-looking Conservative MPs in any case.

Those of you who follow me on Facebook or Instagram, will have seen that I have been rushing around various organisations who come into Parliament to inform us about their latest campaigns. I often get emails from constituents asking me to attend, although this is not always possible depending on what is happening elsewhere, such as Bill committees or in debates.

One of these events was on animal welfare and fireworks. Several charities are asking the government to restrict the amount of time that fireworks are let off as it frightens many animals. I know that if you have animals you will be aware of this and I hope their campaign helps.

On Monday, I asked the Defence Minister about bullying and harassment in the armed forces. I spoke about this on BBC 24 News on Saturday having just returned on Friday from two days in Shrivenham. Last week I had asked Lt General Sharon Nesmith why in the 40 years since I had joined the Territorial Army, it had taken until only recently to have women in top leadership roles in the armed forces.

Her response was not really very helpful so I asked the minister about whether he thought that bullying and harassment had meant that excellent women had left before they were promoted. He agreed with me.

I hope this is now the armed forces ‘Me Too’ moment and women will feel more comfortable serving. My colleague Sarah Atherton on the defence select committee led a report into this and the recommendations have been accepted. You can read the report here.

On Tuesday, I attended an interesting meeting on assessment in primary schools following a report by the Independent Commission on Assessment on Primary Education. It goes further than I think the Government will accept.

However, we do need to investigate how to improve the chances for every child and I spoke about this with the Prime Minister on Wednesday. He, like me, likes the idea of an English baccalaureate and I hope to be working with his policy team on this. I have set up an All-Party Group on this and wrote an article for Conservative Home which you might like to read here.

The second reading of the Infrastructure Bank Bill went through on Tuesday without a vote, as all parties agree that this should help finance projects around the country.

On Wednesday, the Leader of the County Council, Rob Humby, came up to Westminster to talk about the authority finances and his plans for reorganisation. We talked about having more flexibility for councils to use government money and this is something I will bring up with ministers as will other Hampshire MPs. We work together to make sure that we get the best deal for the county.

Yesterday, I secured a debate on Yemen which has not been discussed for some time in Parliament. It was in Westminster Hall where we hold a lot of backbench debates. I talked about the fact the conflict is an internal civil war although one that has brought in military assistance from other states. It is not one by proxy as some MPs seem to think.

The Labour MP Valerie Vaz and myself were born in Yemen and it was good to hear from Alyn Smith of the SNP who had been brought up in Saudi Arabia and agreed that it was a complex war. The debate was an example of different parties working together for a similar aim, although a couple of the interventions and speeches were less helpful.

Today, I have had a busy day in the constituency visiting Morrisons in Horndean to learn more about their communities projects. Community Champions Karen and Sara are doing fantastic work supporting  local groups and good causes.

I have also been doing some poppy selling in Sainsbury's in Waterlooville with David Allport, followed by an open meeting in the Fox and Hounds in Denmead. I am doing a series of pub meetings so people can meet in the warmth of a pub rather than outside and we will be publishing the dates shortly. Please come and have a chat.

The next of my forums is on Health and we have several experts coming to talk about GPs, dentists, and hospitals. Please come along on Friday 18th November 4-5 pm – I hold it at this time so the panellists can get home at a decent time but I am aware that it might not help those who are working. If that’s the case, let me know if you have any questions you would like me to ask. You can register for it here.

I have a Times Radio panel on Sunday so I will be preparing for that this weekend.

Don’t forget that I do tours of Westminster on Monday mornings so please let my office know if you would like to come up.